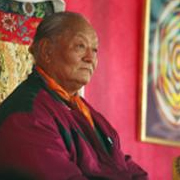 Chögyal Namkhai Norbu was born in Derghe, eastern Tibet, in 1938. At his birth, he was recognised as the reincarnation of the great Dzogchen Master Adzom Drugpa. From his early years he studied with some of the greatest teachers, receiving traditional training in the different lineages of Tibetan Buddhism. In 1955 he met his root teacher, Changchub Dorje, from whom he received a transmission of the knowledge of Dzogchen. In 1950, following an invitation from Prof. Giuseppe Tucci, he moved to Italy where he went on to teach Tibetan and Mongolian language and literature at the University of Naples. While teaching Yantra Yoga in 1976, he started giving Dzogchen teachings to a group of his students, who later became the first members of the Dzogchen Community. His profound understanding of Dzogchen combined with an ability to communicate it in a direct and simple manner, the Dzogchen Community has grown with centres established throughout Europe, North and South America, Russia and Australia. Since 2005 Chögyal Namkhai Norbu's students could follow many of his teachings through live webcasts, thus tightening the traditional bond between teacher and student. On Thursday 27 September, 2019, at 9 pm our beloved Master left this earthly existence in a serene and peaceful way, at his residence, Gadeling, Merigar. Let us continue the journey together.